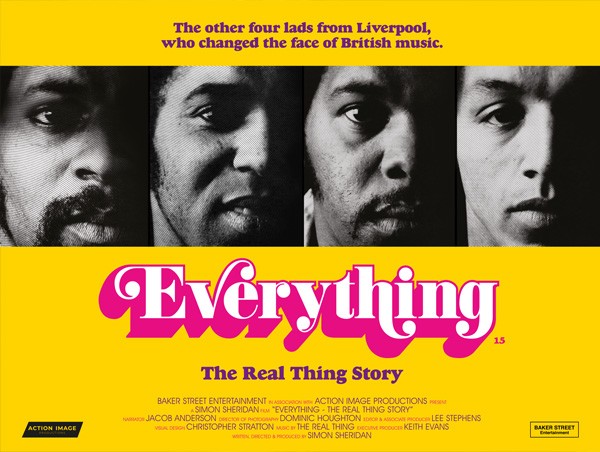 Everything: The Real Thing Story

The Real Thing are extremely proud to announce the premiere of their long-awaited movie Everything – The Real Thing Story, directed by Simon Sheridan, and distributed by Screenbound International Pictures.

The ‘other four lads from Liverpool’ tell their story from the tough streets of Toxteth to the bright lights of New York, and international stardom as Britain’s first million-selling soul and funk band.  Against a backdrop of racism and social and political turmoil, The Real Thing were the first all-black British band to hit #1 in the pop charts – with the perennial ‘You To Me Are Everything’ – and as a result became the original black pin-ups for teenage fans in the UK.

Other hits like ‘Can’t Get By Without You’, ‘You’ll Never Know What You’re Missing’ and ‘Can You Feel the Force’ set dancefloors alight, but their proudest moment was composing their anthemic ‘Children of the Ghetto’ – the first ever song to address the plight of black people in the UK, and is now a staple of Mary J Blige’s live stage act.

The band’s massive success has also been tempered with personal tragedy, but for the very first time Eddy, Chris and Dave tell their incredible story of a 45-year-long career. After five decades, they remain the true pioneers of British soul.